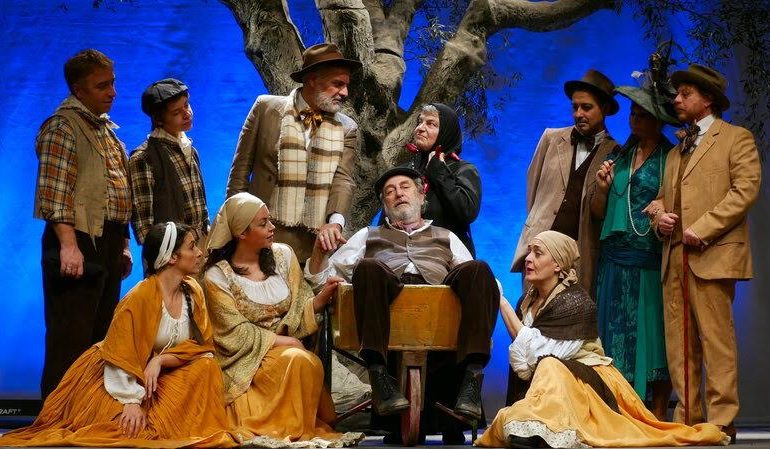 On 14 January at the Naselli Theater in Comiso with the direction of Walter Manfrè. Protagonist Angelo Tosto

Comiso – The actor Angelo Tosto will be the main protagonist of the second appointment of the Naselli theater season in Comiso. The next 14 January will be staged with “The annuity”, the theatrical performance, directed by the great Walter Manfrè, with which the Comisano theater intends to pay homage to Luigi Pirandello. An emblematic, joyful, ironic, paradoxical, amusing tale where Pirandello’s melancholy logic reaches heights of authentic enjoyment. A show that is a true jewel of Pirandello’s irony, produced by the Città Teatro Association and staged with the full company and original music by Carlo Muratori.

The plot is fun and surreal at the same time. The wealthy cloth merchant, Michelangelo Scinè, driven by his wife’s greed, wants to become a landowner and acquires land on land, snatching it from the small and poor owners in exchange for an ephemeral annuity. It starts with the old Ciuzzo Pace who then dies and therefore the merchant will no longer have to pay the annuity but will be able to keep the land forever. He proposes the same pact to an old landowner, Maràbito, but who nevertheless does not die. Indeed, the years go by and despite the oppression of Scinè, his wife and even the notary, he sees everyone die. And even when he turns 100, he takes a long time to die. For this he turns to death, calling it several times. But she does not seem to listen to his requests, almost giving an unsolicited eternity.

“The beauty of this text, which sometimes evokes certain colorful but melancholy atmospheres of Andrea Camilleri – explains the director Manfrè in his notes – consists in the simplicity of its story, in its” strangeness “and in the irony with which the theme of imponderability is treated of human destiny. The story takes place within that peasant world so dear to the authors of Agrigento where the disease of the “robba” and at the same time the wise and ancient philosophy of the farmer, play an opposing and at the same time fundamental role in the unraveling of the daily, poor existence of the characters. And the peculiarity of this theatrical operation consists in the lightness of the story which, counteracting the tragic theme of the inexorable flow of time, creates a fairytale atmosphere waving between the comic and the poetic without ever touching the dramatic as the same topic might suggest. “.

For information and reservations, you can consult the official social pages of Spazio Naselli or call the number 328.4974542. To access, in compliance with the anticovid regulations, it is mandatory to show the reinforced green pass and wear the ffp2 mask. By respecting the simple rules, even though the period is complicated from a health point of view, it is possible to continue living the great theater together and live. The entire calendar of events can also be consulted on the renewed website www.spazionaselli.it.